How to Build a Thematic Campaign (Three or Four Lists) 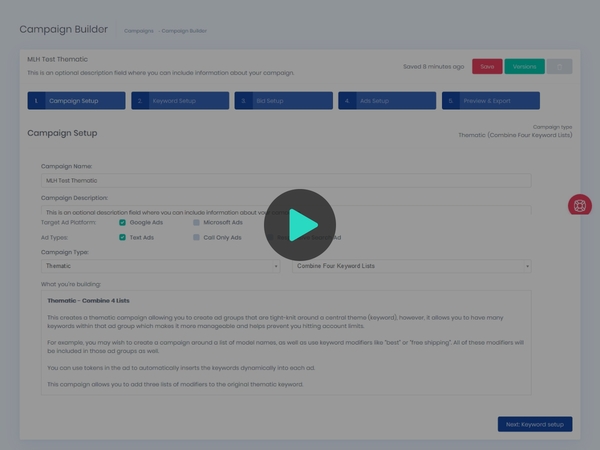 Getting started with this type of campaign is pretty straightforward. When you start a new campaign, enter the basic campaign information and be sure to choose Thematic as your campaign type. You’ll want to choose three or four lists depending on how many sets of expansion keywords you have.

Onward to the Keyword Setup tab! There you’ll see 3 or 4 boxes depending on the number of keyword lists you chose on the last screen. Type, paste, or load your seed keywords and each set of expansion keywords into the appropriate box.

Note that SpeedPPC provides dozens of pre-existing keyword lists you can easily use to grow your campaign, such as colors, place names, action words, and more. You can add these via the “Load” menu above the box for each set of keywords.

Finalized your keyword lists? Now move on to the additional settings at the bottom of the page. Keyword URL’s function similarly to any SpeedPPC campaign. Since we're using multiple keyword lists, the Advanced Options section is important. Here’s what you need to know here:

Keyword clean-up: This will correct extra spaces and bad characters in your lists. It’s OK if your spreadsheet is a little messy - SpeedPPC can fix it for you!

Phrase spaces: If any of your lists contain keywords made up of more than one word (for example, “teal blue”), when you chose “Remove & Replace” SpeedPPC will eliminate the space (the final keyword would be sweater tealblue). In most cases, you’ll want to set this to “Don’t Remove.”

Keyword Combining Options: For Mix Type, if you choose “Same as Column Order,” your seed and expansion keywords will appear in the order they appear on this screen (seed keyword first, then expansion 1, then expansion 2, then expansion 3). While this may not be a problem if you want a smaller list of keywords or if you’re only using broad match, the downside to this is combinations may be less natural than if they were in a different order (plumber emergency rather than emergency plumber or sweater red cashmere instead of red cashmere sweater). You could potentially miss out on some valuable exact match and phrase keywords.

If you choose “Every Variation,” SpeedPPC will create an ad group for every possible combination of your keyword lists. This will ensure you don’t miss any of the possibilities, but you may end up with a lot of nonsensical, irrelevant, or awkward keywords that will clutter your campaign or that you’ll need to spend time cutting (not just buy new house but also new buy house; not just california hotel but also the song hotel california).

Mix Type Spacing: Here you'll usually want to choose “Space between words,” unless you have a special case where you want one-word keywords.

Include seed keywords without mixing: Checking this box will create ad groups for your seed keywords by themselves with no expansion words: just sweater, socks, etc…

That’s it for the Keyword Setup section. On the next screen, you’ll set your bids, match types, and other settings the same way as you would for a campaign with a single list.

When it comes to your ads, multiple list campaigns have additional considerations that simpler campaigns don’t, mainly when it comes to inserting dynamic text via tokens. You’ll want to use the {final} token if you want your whole keyword to be included, as {seed} will only include the words and phrases from the seed keyword list. You can also use {expansion1}, {expansion2}, and {expansion3} to insert your expansion keywords in your ads at different points. The screenshot provides an example, and you can learn more about tokens and dynamic keyword insertion here.

Once you have your ad copy, you’re all set and you’re ready to preview and export your campaign. You have now mastered the Thematic Campaign type. Hooray!